After only a month of advanced amphibious training at Ft. Pierce, the commanding officer of the Amphibious Training Base sent a troop movement order to Joe McDevitt. If you have never seen a US Navy troop order circa 1943, the cover letter  of that important document reads as follows:

US NAVAL AMPHIBIOUS TRAINING BASE

2.              This is a troop movement and the Disbursing Officer, U.S. Naval Amphibious Training Base, Fort Pierce, Florida is hereby authorized and directed to furnish the necessary transportation , subsistence and baggage transfers for the proper execution of these orders.

3.               The Disbursing Officer is hereby authorized and directed to close out the pay accounts of the men in your charge and deliver them to the Personnel Office.

4.               The records and accounts of the men in your charge are handed you herewith for safe delivery to their new Commanding Officer.

5.               These orders are of a restricted nature and should not be divulged to any unauthorized persons.

Attached to these orders was a complete listing of the 125 enlisted personnel who would operate and maintain 26 landing craft, including twenty-four LCVPs and two LCMs. We used that list earlier to help identify some of the sailors pictured in the Irwin Goldstein family collection (see blog posts dated March 7, March 16, and June 3, 2017.) We will try to identify more of those young heroes in future posts.

The list of fifteen officers named above will also be used in forthcoming stories to help identify officers and share pictures from the more recent Toon Family album.

If you recognize pictures or names of any of these young men, please contact us!

One final note. On precisely the same date that these orders were sent to Joe McDevitt in Florida (February 15, 1944), personnel at New York’s naval shipyard snapped the official file photo of the ship that would be home for McDevitt’s boat group for two years. She was a brand spanking new attack transport: USS LEON APA 48. 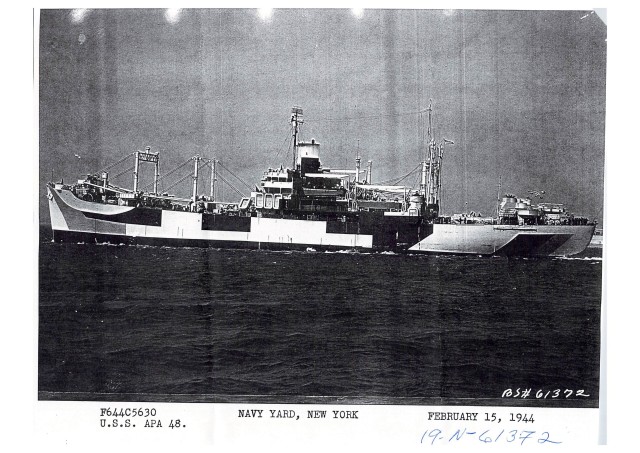 Notice to Amphibious Forces, United States Pacific Fleet: Reinforcement is on the way.